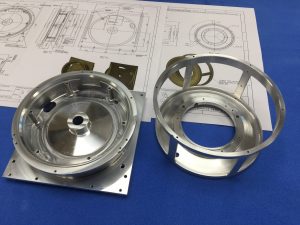 If the missions get the go-ahead, MSSL will build instruments known as top-hat electrostatic analysers for studying hydrogen and helium ions found in the solar wind.

The laboratory has strong heritage with such instruments, having flown them on missions like the multi-spacecraft Cluster mission studying the Earth’s magnetosphere and the Cassini mission to Saturn.

The machined parts shown here are components of the top-hat type Plasma Analyser (PLA). In the first instance, they will be used for testing instrument sub-systems of the PLA prototype. Subsequently, they will naturally form part of the flight PLA instrument.

Aerotech are proud to support UCL’s Mullard Space Science Laboratory with these projects.

Press release courtesy of UCL, photo by Aerotech published with the permission of UCL